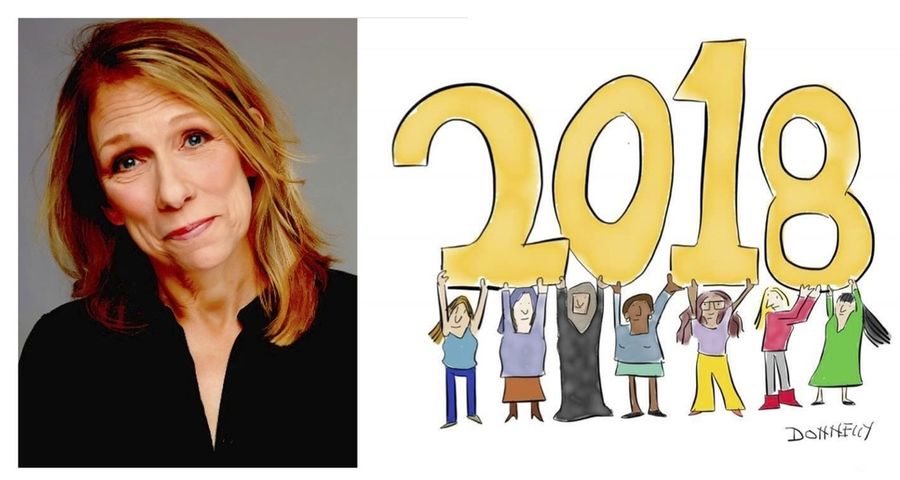 Trump claims to love women, but many American women are gritting their teeth. For New York cartoonist Liza Donnelly, respect for the rights of women is not just a legal matter, but above all a question of culture. 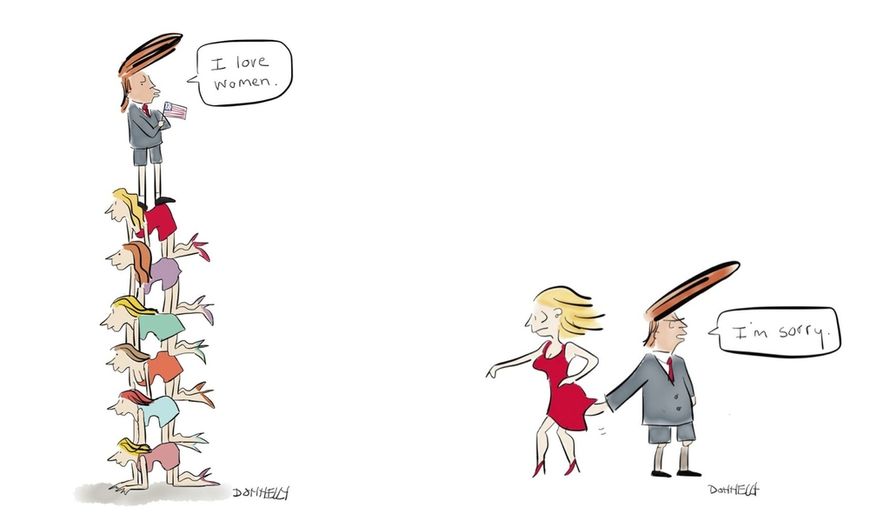 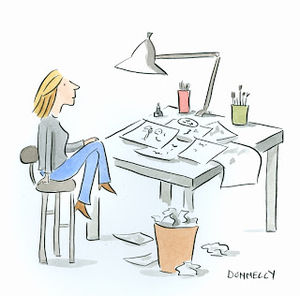 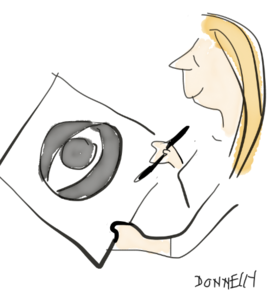 Liza Donnelly grew up in Washington during the Civil Rights Movement, the Watergate hearings, and the early feminist movement. Feminist militant, speaker, curator, author of sixteen books including Funny Ladies and Sex and Sensibility, her cartoons appear regularly in many newspapers and magazines including The New Yorker. She invented a new form of journalism by drawing directly onto her tablet for CBS News, Medium, NBC… for whom she produced live coverage of the 2017 U.S. presidential election. She is a member of the international organization Cartooning for Peace.

Humorous drawing is, for her, a universal means of communicating throughout the world, across frontiers. It starts with an idea which is born from observing the world, reading the paper or browsing the internet. Cartoonists, she says, are like sponges, taking in people, their obsessions and their behaviour, and recreating them on their drawing boards. Drawing is like directing a show; image and words have to be perfectly choreographed in order for the drawing to become a timeless work of art.

Liza Donnelly agreed to answer a few questions for Le Crayon, and we thank her warmly. 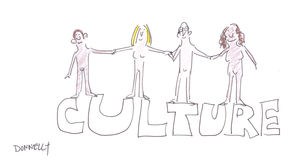 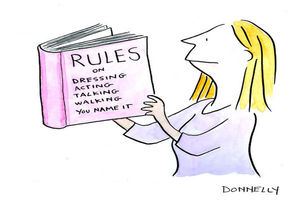 Bruno Caïetti for Le Crayon – You are one of the most famous and best-known press cartoonists in the world; for you, what is the function —or maybe the mission— of cartoons?

Liza Donnelly – I see political cartoons as a form of communication. On the one hand, they serve a purpose to expose corruption, injustice in the world, shed light on the wrongs of government leaders and cultural habits.   But cartoons also can be a form of dialogue between people, a discussion of issues that are important and about which there might be disagreement. Of course one purpose is to bring smiles and laughter to people sometimes – although not always.

B. C. – The 2018 exhibition of Le Crayon is devoted to the rights of women: as a person who travels a lot and knows the international scene, does it surprise you that in France, self-proclaimed “country of  human rights », we feel the need to organize this kind of exhibition?

Liza Donnelly – Not at all!  The most liberal countries still have problems with equal rights for women, including the United States. This is because while a country may have equality laws, it is the culture too that must change. And that takes a long time. Cartoons can help people grasp the need for change. Cartoons point out the silly things people do to others, and expose bad behavior with laughter sometimes. 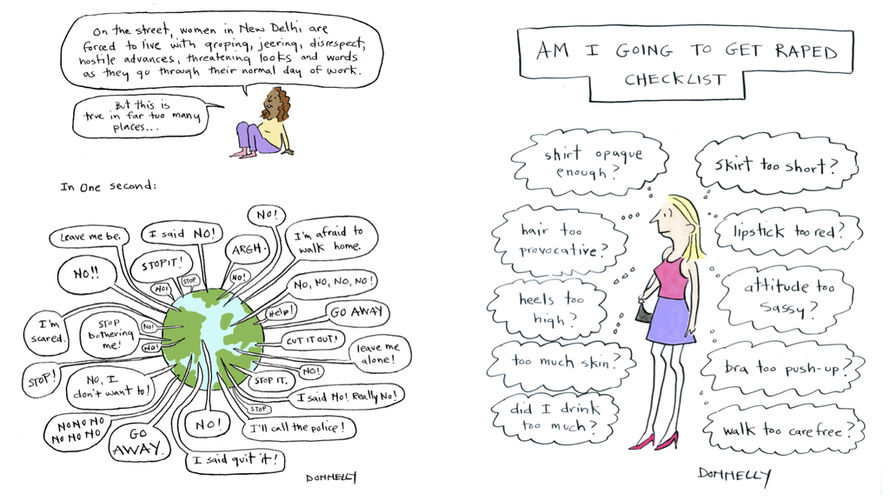 B. C. – How is the situation in the United States concerning women’s rights; and how do you reflect it, or confront it, as a cartoonist?

Liza Donnelly – The situation for women’s rights is good in the US, but could be better, of course. 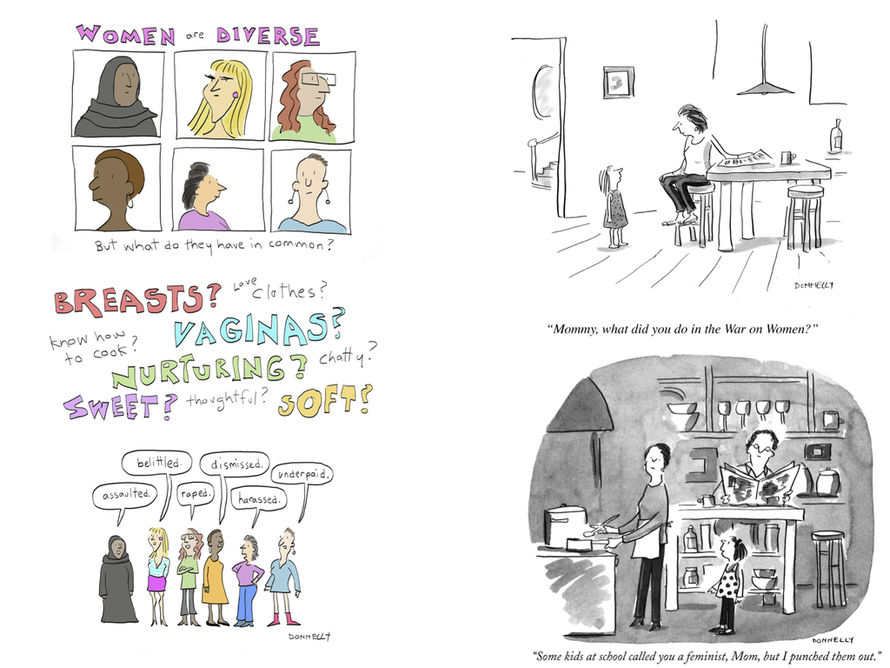 We do not have enough women in powerful government positions, but that may be changing this year because many women are running for office.  There is still pay inequality, and a lot of sexual harassment and rape and we are trying as a country to lower those cases. As I said before, change not only needs to happen in legislation and pay rates, but in cultural attitudes. 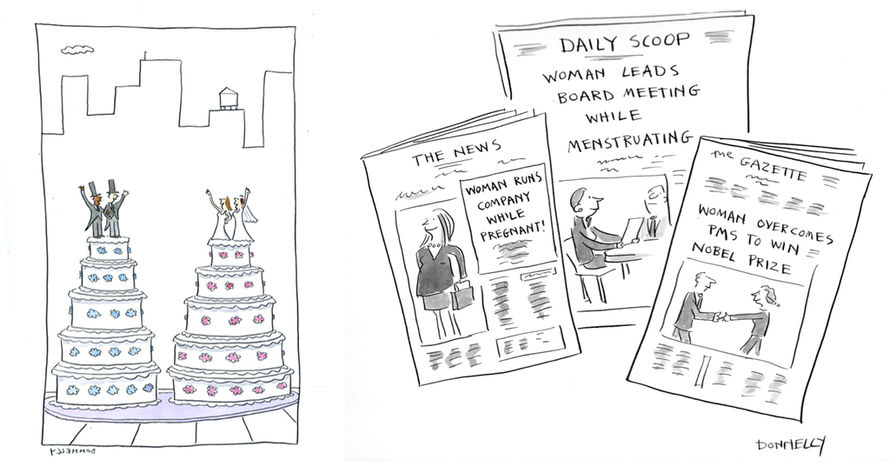 Liza Donnelly – Cartoonists are cartoonists, and whether you are a man or a woman makes little difference. Women do not draw differently from men, they do not have a different approach, and women do not all draw the same way nor do they think the same way. Women are diverse.  The one thing women can bring to the table as women is experience at being a woman.

Men can’t do that (but transgender men could bring an interesting view).  Male cartoonists can and should draw cartoons about women’s rights.  But only women can draw feminist cartoons from the point of view of being a woman.  We need all viewpoints! 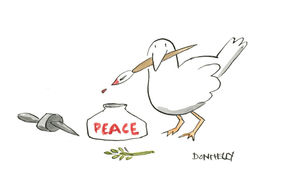 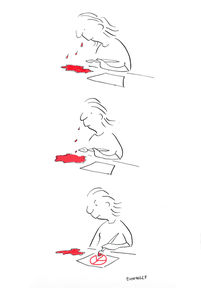 Liza Donnelly – I think in countries like France and the U.S., it is the same, freedom of expression has not decreased or increased.

As you know, lately we’ve had some challenges in that regard in cartooning, but I see those as learning times.

As difficult–  and sadly deadly– as they were, they were important to go through.  But certainly in individual countries with dictatorships, it has decreased.

The Internet makes it harder for such governments to keep people quiet, and that’s good. I think the future of freedom of expression is good!

Liza Donnelly is a member of the International Committee of Cartoonists who has joined our project of a touring exhibition : “The sharp end of the pencil : women’s rights! Exhibition of Caricatures, political cartoons and freedom of expression” which Le Crayon is organizing for 2018 in partnership with France-Cartoons and the Festival du Dessin de Presse et de la Caricature de l’ Estaque (FIDEP).

2005 : Publication of her book Funny Ladies to the timeline (2005) (a history of women cartoonists.) The same year, at the time of the affair of the Muhammed cartoons, she addresses the United Nations on behalf of Cartooning for Peace.

2012 : Represents the US Department of State in Palestine and Israel, to discuss the political impact of cartoons as an instrument for peace.

2014 : Publication of her book, Cartoon Marriage. 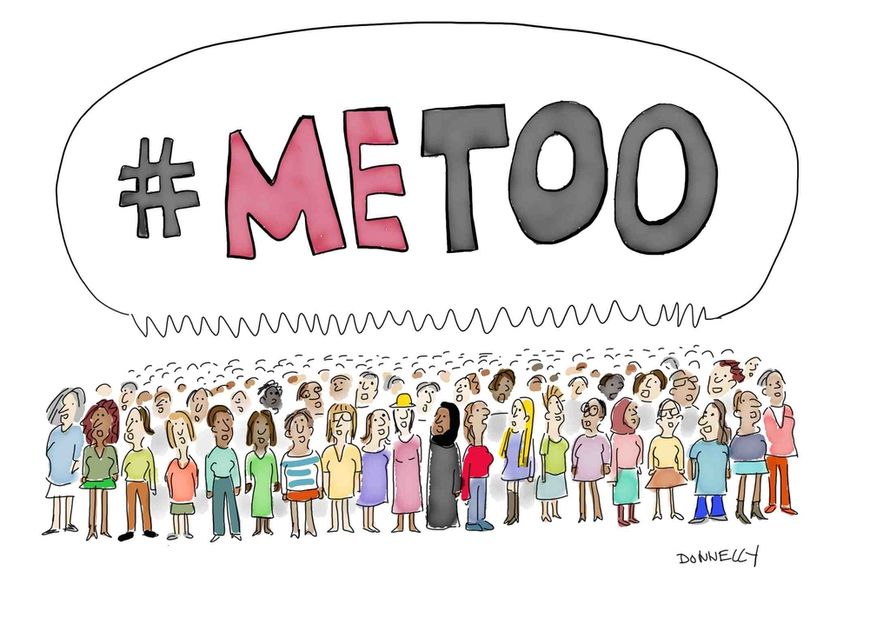 Also In the « Free speech » section :

– Smitha Bhandare Kamat, committed and inspired : When freedom of expression rhymes with compassion !

– Liza Donnelly is dedicating 2018 to the rights of women.

– Draw to move the rows ! Meet Mitu, the cartoonist from Bangladesh ! 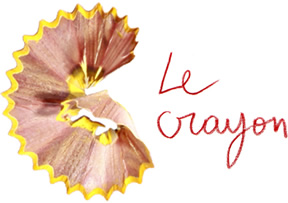